How did we get here? A history of Barrett Communications and HF radio

For 40 years, Barrett Communications has been at the forefront of innovation in high-frequency (HF) radio – coming a long way from its humble beginnings in the Australian aviation sector.

The history of Barrett Communications is interwoven with the history of HF radio itself. Let's take a look at how the technology was developed and how Barrett has grown with it.

After striking the infamous iceberg, radio operators on the Titanic put out an emergency radio call to nearby ships, calling for aid. This hailing method is now automated through the Global Maritime Distress Safety System (GMDSS). The Titanic's radio and this system – which is mandatory on all commercial vessels and common on recreational ones – work through HF radio frequencies.

Reverend John Flynn is a household name in Australia for his contributions to the Royal Flying Doctor Service (RFDS). From its first flight in 1928, the RFDS has a long history of bringing vital medical services to people in remote communities. Alfred Traeger's pedal radio, invented in 1929, became an essential tool for calling the RFDS.

1948: The School of the Air begins operation

The vast radio network across Australia gave rise to the School of the Air, lessons for children in remote areas carried over HF radio. The brainchild of Adelaide Miethke – vice president of the South Australia RFDS wing – the School of the Air has since grown to cover over 1.5 million kilometres, and it still operates today.

The origins of Barrett Communications lie in the growing need for HF radio in aircraft. The company grew out of efforts to enter the Australian HF radio market, with early products including a number of antennas for HF radios.

The company's first radio was the result of Barrett's founders' work to develop an HF radio for the Australian aviation sector, rolling out in time for new legislation requiring single sideband radio in the industry. By the time the F24 was retired in 1992, over 6,000 units had been sold.

Knowing the need for reliable contact with remote communities in the Outback, Barrett moved from aerial to ground-based HF radio products with the SB220. Many of these would become part of the School of the Air radio network.

With initial exports of commercial HF radios to the African continent and other areas with little communications infrastructure, Barrett Communications stepped onto the international stage.

Barrett Communications rolled out HF radios with DSC. This standard established a method for calls directly between two HF radios. It is a key component of the Global Maritime Distress Safety System.

Barrett's telephone interconnect enabled HF radio operators to connect to telephone networks. This became a commonly used tool for operators in the Outback to connect with existing phone systems.

Barrett Communications began to move from the Model 220/225 – a 12-channel crystal-locked HF radio – to the Model SB250, which contains 250 channels and optional selcall and telcall available on later firmware versions.

When the internet started gaining steam, many in the industry thought it would be the death of HF radio. The team at Barrett, however, leveraged internet technology to strengthen HF radio. The efforts paid off with the 900 series – including the 950 main transceiver, which had digital selective calling, a digital selector processor and a microprocessor that ran the software and enabled firmware updates.

Barrett moved into the 2000 series of transceivers, including the 2050. These radios went even further with internal digital technology while also creating a more intuitive user interface. This series was also groundbreaking with the ability to send email, fax and data through a paired modem and software suite.

The PRC-2090 HF manpack is released. This portable HF radio marks Barrett's entry into the tactical radio sector, providing communications for defence and military organisations around the world.

Barrett Communications moved into VHF radio systems with its acquisition of Q-MAC Electronics.

2012: FirstNet initiated in the US

After communications issues came to light during the September 11 attacks and Hurricane Katrina, the US Congress set up the FirstNet initiative to create a nationwide emergency radio network in the 700 MHz spectrum. This highlights the role HF radio plays in emergency response efforts.

Four decades after first manufacturing radio antennas, Barrett is creating equipment that revolutionises HF communications – the 4050 SDR transceiver gives the tasks handled by transistors and semiconductors to software. They can also interface with tablets and other digital devices via Wi-Fi for even greater flexibility.

While today's HF radios might be unrecognisable to operators in the early 20th century, they are still fundamentally the same. New technology has just brought them forward into a more powerful and usable space. Their use has also changed dramatically, evolving from Australian aviators to military personnel around the world. In fact, 70 per cent of Barrett's business today is in the tactical market. The company's reach has also expanded significantly, with products sold into over 150 countries and on every continent on Earth.

What's next for Barrett Communications and HF radio? Only time will tell, but it's sure to be revolutionary. 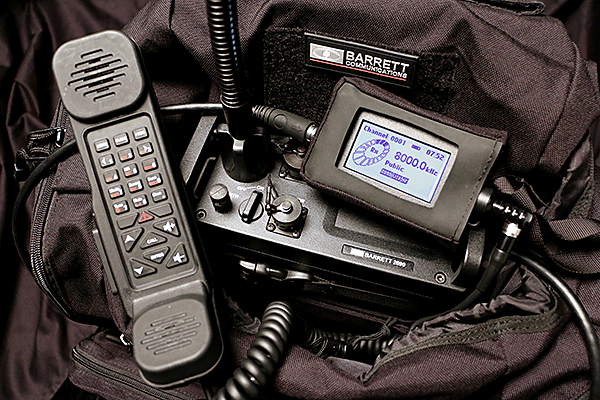 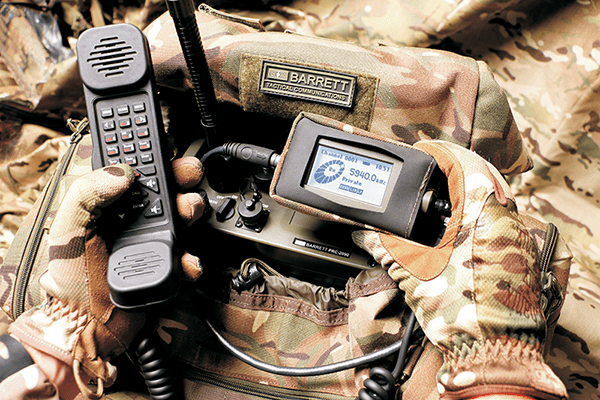 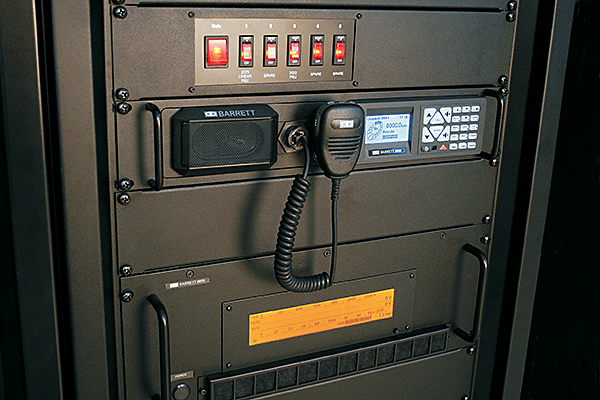 The frequency range of the PRC-4090 HF SDR Transceiver can independently locked for both the transmit and the receive function, as a feature of the 4000 series HF programming software.

The frequency range of the 4090 HF SDR Transceiver can independently locked for both the transmit and the receive function, as a feature of the 4000 series HF programming software

The frequency range of the 4050 HF SDR Transceiver can independently locked for both the transmit and the receive function, as a feature of the 4000 series HF programming software