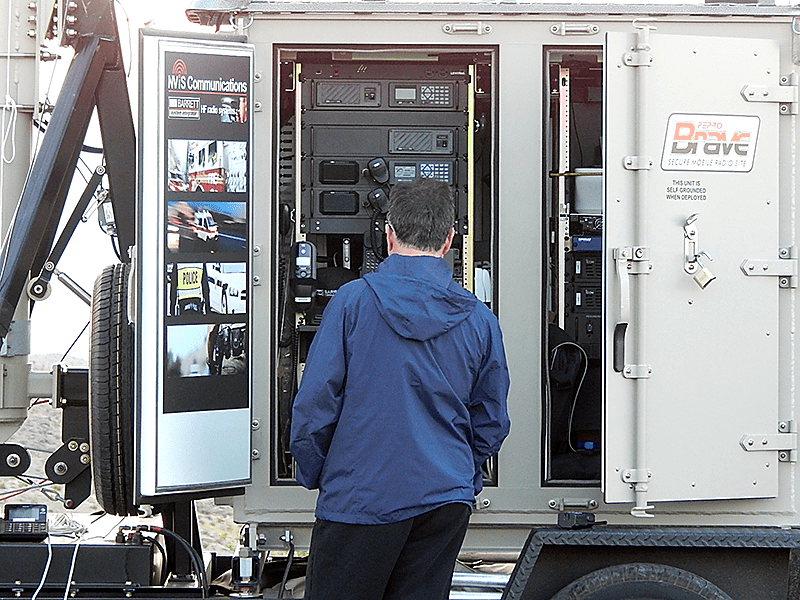 The Baker to Vegas organizers and medical staff determined that a separate Doctors Network was needed to provide direct communications from each of the stations in the race, back to a command post that also had direct connectivity to a Southern Californian hospital for any specialist advice or counsel, in the event of a medical emergency during the relay race.

The CrucialConnect® Tactical Communications Unit (TCU) developed in collaboration with NVIS Communications, REDCOM Labs and Barrett was deployed at a strategic location in California and was able to provide primary, emergency or backup communications via a multitude of mediums and modes.

Due to communications issues early in the race the CrucialConnect® TCU provided the primary communications network for the entire race, until the normal operations had been rectified. It then continued to operate in the background providing full connectivity for the Doctors Radio Network throughout the event.

The Medical Radio and Doctors Radio Network Director, Mr Peter Benjamins commented “NVIS Communications and its partners provided the whole communications backbone for this year’s race and saved the day on Saturday when our own system was inoperable”.

The CrucialConnect® TCU was deployed and setup in under one hour at a strategic high location off road in the Mojave Desert Wilderness area overlooking the first half of the race course from Baker California to Pahrump Nevada. From this location the TCU was able to acquire both Terrestrial (via Verizon LTE) and also from Satellite (GlobalStar/Inmarsat) SIP trunks that were then distributed to the secure race networks.

John Rosica, President of NVIS Communications went on to say, “We achieved this great result with a number of different systems integrated together. The direct SIP access was achieved via either VoIP or Analog Telephones that were laid down at the CrucialConnect® TCU, for local command and control. VHF and UHF Repeaters were deployed with wide area coverage over the whole route from Baker to Pahrump Nevada. HF automated direct dial inward and outward to and from anywhere over the course and out to over 400 miles to blanket any location outside of VHF/UHF range, and finally additional local coverage via MicroCellular Band 14 base station for FirstNet operators with a 12km diameter range.”
All users regardless of what radio platform they were on (VHF/UHF/HF) were able to acquire a dial-tone directly from the CrucialConnect® TCU and connect to anyone outside the race area. Further, anyone calling into the CrucialConnect® TCU from outside the course could have automated direct access to any or all of the radio platforms via a number of preconfigured conference bridges that they could access via telephone whether cellular, analog or VoIP.

Additionally, a complete HF system utilising Barrett Communications HF Voice and Data was in place at multiple fixed and mobile locations throughout the course and beyond so that in the event that other mediums were down or unavailable, the HF system would be able to provide direct connectivity to and from the race locations to external automated HF telephone interconnects in the greater Southern California or even surrounding States through the public switched telephone network (PSTN).

Mr Rosica went on to say “The CrucialConnect® Tactical Communications Unit (TCU) does not rely upon any manual intervention to complete voice, data or email connection, as it is fully automated. This system provides HF voice, data or email to be transmitted through the PSTN to emergency response services anywhere in the USA, from an area with no PSTN or infrastructure to support voice or email communications. We see many emergency management agencies understanding the unique solution this system offers. We were pleased to provide the equipment and service for this year’s event and look forward to continued service to the Baker to Vegas event in the years ahead.”

The Barrett Communications will showcase a range of customise solutions at APCO 2017, visit stand 1249 for further information on these systems and their capabilities.